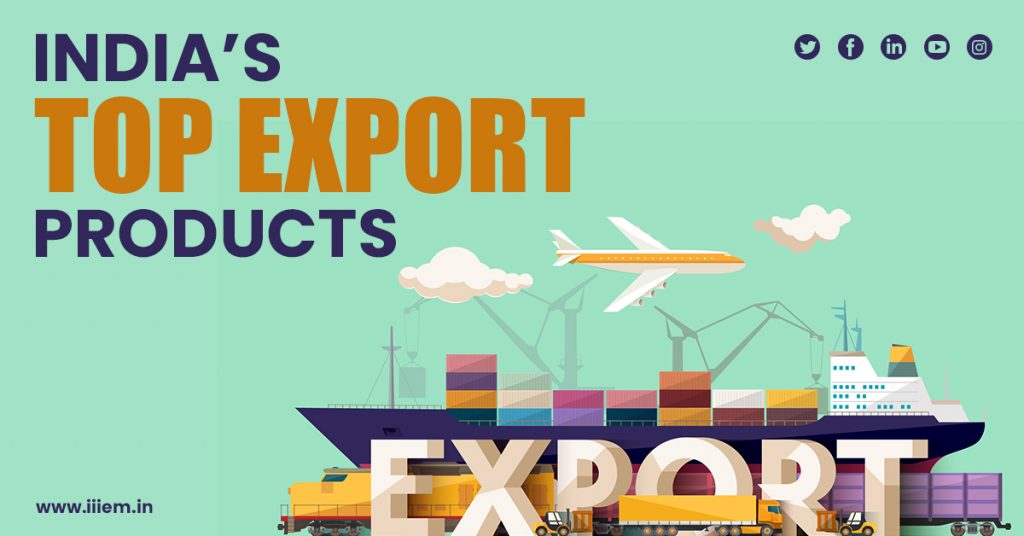 For any country, exports play an important part in increasing GDP. India ranks under 20 most exporting countries of the world. India is the world’s largest democracy with large agricultural land. The government of India is trying to build a new India.

Some of the main export products are described as under –

Our country is one of the leading countries that produce, exports and consumes jewellery, gem- stones all over the world. It helps to bring foreign currency to the country. India has a market share of 18.8 percent of the total diamond export market. Latin America, Singapore, United Arab Emirates, Russia, USA, Hong Kong, China are some of the major importing countries of gems and precious stones from India.

It plays a significant role in increasing the Indian economy and is the 4th largest exporter in the world. The private sector accounts for almost 38 percent of the total capacity.  India is a country that is very rich in minerals and thus it exports hugely to other countries. Currently, the country processes up to 87 different types of minerals and Iron ore is one of the top export mineral products from India.

Almost 8 percent of the total Asian production of steel is been done by India. This helps in producing more steel and exporting it. India is extremely famous for diesel generators. The country exports equipments, technical services and machinery to various countries of the world.

The Indian pharmacy industry ranks 3rd in size in the whole world and 14th in case of value. It is one of the most lucrative business in the world but it comes with some of the most strict rules. The Indian pharmaceutical industry exports to more than 200 countries. The major exporting countries are – China, Russia, United States, United Kingdom and Germany. Export products from India include – Active ingredients (APIs), drug dosage formulations (FDFs), pharmaceutical materials, biopharmaceuticals, medical services and finished drugs.

India is amongst the topmost tractor manufacturer in the world. It is been exported to countries such as – South America, the middle east, Africa, Asia and others. The country makes automotive parts such as electric motors, equipments, diesel engines, etc.

The automotive industry is strongly growing and it is expected that the passenger cars would see a demand of almost 10 million units by the end of 2020.

When it comes to the export of Rice, India leads the race. It has an annual global total of almost 26.7 percent. In the last 50 years, the production of rice has become 3 fold.